Fifty states, 20+ metrics, five categories and one official winner. Keep reading to discover which state takes the top spot as the Healthiest State for Seniors, and learn how it got that title.


In an effort to identify the healthiest states for seniors, we put all 50 states and the District of Columbia to the test, measuring each state against 20 metrics that evaluate the quality, affordability and accessibility of local health care. The data extended to hospice care, nursing homes, home health care, prescription drug coverage and Medicare spending.

We even included other things that can affect your health, such as climate, air quality, crime, food insecurity, physical activity, volunteerism, community data and more.

Read on to see how we determined the rankings and where your state ranks. Our top five might just surprise you. 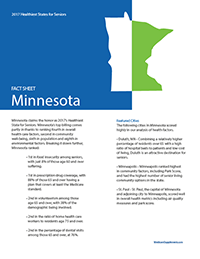 Minnesota claims the honor as 2017’s Healthiest State for Seniors. Minnesota’s top billing comes partly in thanks to ranking fourth in overall health care factors, second in community well-being, sixth in population and eighth in environmental factors. Breaking it down further, Minnesota ranked:

The following cities in Minnesota scored highly in our analysis of health factors.

Iowa ranked as the second healthiest state for seniors thanks to some impressive consistency that saw the state rank among the top 13 for all five categories including a fourth-place finish in community well-being. Iowa also ranked:

The following cities in Iowa scored highly in our analysis of health factors. 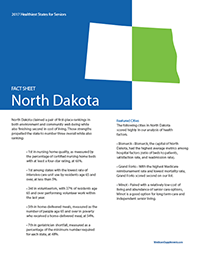 North Dakota claimed a pair of first-place rankings in both environment and community well-being while also finishing second in cost of living. Those strengths propelled the state to number three overall while also ranking:

The following cities in North Dakota scored highly in our analysis of health factors. 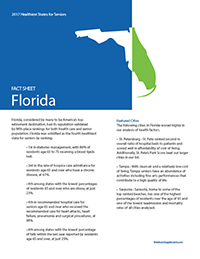 Florida, considered by many to be America’s top retirement destination, had its reputation validated by fifth-place rankings for both health care and senior population. Florida was solidified as the fourth healthiest state for seniors by ranking:

The following cities in Florida scored highly in our analysis of health factors. 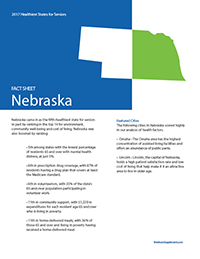 Nebraska came in as the fifth-healthiest state for seniors in part by ranking in the top 14 for environment, community well-being and cost of living. Nebraska was also boosted by ranking:

The following cities in Nebraska scored highly in our analysis of health factors.

Our research team compiled data from multiple sources including publicly available national data as well as third-party data from the United Health Foundation and others. Our meta analysis included 20 discrete metrics across five key areas: population/demography, cost of living, healthcare, community, and environmental factors. Each state was scored on an aggregated and weighted average based on a commissioned survey of 100 senior respondents who rated how important each factor was to their health and wellbeing. Areas such as healthcare coverage and affordability were weighted higher than environmental and community factors.

The analysis was based on the most recent data available for each dimension. A full listing of data sources is provided below.